I can’t help it – I get horribly ‘retired middle-class’ at Christmas.  I buy the Radio Times, listen to the Archers.  I attempt quizzes of the year in newspapers. I invest time and interest in entire episodes of Midsomer Murders.  The patina of glossy adverts for stairlifts and cruise – ships holds my gaze.  I can’t help it, and I love it.

So I needed some acid to cut through this muzzy, smuggy love in, and it came in the form of Orphans by Dennis Kelly, which was recommended to me to read for a piece of writing that I’m working on.  It reminded me of one thing and taught me another; firstly – reading plays for pleasure can be exhilarating.  I used to work in the bookshop at the National Theatre – my best ever job in retrospect and one that I only appreciate now, at a sorry distance of nearly twenty years.  I used to read plays all the time – it was encouraged for you to be seen reading plays at the counter, on the shop floor, on your breaks.  People would ask for recommendations and I could be learned and suave and theatrical (life goals, basically).  And I could also swan around backstage and pretend to be in stuff.

Now I don’t want to be in stuff anymore, but reading Orphans reminded me that actually reading a play can be more emotionally powerful than seeing it performed, where there’s always the risk that it can be a bit shit or indulgent or forced.  But a well written play plays in my head just as I want it to – and it turns out that I am an incredible director.

No, it’s the play.  And this is the thing that reading Orphans made me realise.  I think that playwriting has changed more than other written form, in terms of what is permissible and how it is expressed.  I couldn’t stop reading Orphans, which I am not going to spoil for you because you should just read it.  But, in brief, it’s the story of a brother and sister and her partner and how they deal with something that the brother has done.  Wow, vague, cool.  But you should read it, because it bites.  It really fucking bites.  And I think back to the plays that I read, including the classics, and I think about how ‘unreal’ they seem in comparison.  They’re polished, but they take a lot of craft from the actor to sound truthful a lot of the time.  With Orphans, you feel as if you are experiencing the dilemma with them, the godawful messiness of the situation, which is not to say it is written ‘off the cuff’.  Because when you’ve got through it and are lying in a sweaty fever dream, you’ll realise that each character had an arc, had something to say. It takes a really brilliant writer to put it together so subtly and effortlessly, so that you don’t see his hand in the writing of it until after you’re done.

So my booklearning is this: reading Orphans has taught me to spend longer on my structure and planning and less time ‘perfecting’ the words.  More at the front end, if you like, as much as it pains me.

And it’s given me a beautiful New Year’s Resolution: Read. More. Plays.

Okay, not as quirky a title as what inspired it, but still.  I have an unusual book review today.  One I which I try and puzzle out exactly why I love the Milennium trilogy so much.

When I first saw commuters on the tube with a copy, The Girl with the Dragon Tattoo struck me as a bit of an airport read.  I am an inveterate snob and don’t care much for other people and their tastes (apart from friends) so the sheer volume of strangers reading it on their way to work made me think it must be shit.  It stood me in good stead with the Dan Brown series.  And Harry Potter.  Yeah, you saw it right.  Never read a Harry Potter, never will.

So, I’ve already put Laarsens’ series in the bargain bin and moved on with life when I’m hit by a sudden wave of lassitude.  So much studying, re-reading Jane Eyre from an A’Level perspective (painful), its understandable that I get a pang for pap.   When someone mentions The Girl with the Dragon Tattoo and describes it as ‘frikking awesome’, I decide to put aside prejudices and give it a go.

A day later, my eyes are bleeding from intense reading.  Girl with the Dragon Tatoo is one of the best reading experiences EVER, propelled by a fascinating plot, intriguing setting and a heroine that any pissed-off female can engage with vicariously.

I’m no afficionado, but I’m sure that the things I’ve singled out so far are nothing unusual in the literary underworld of the crime novel.  A quick mooch through reviews show that critics have said similar about Cornwell, Patterson and Rankin, so I’m beginning to think that they’re required tenets of the genre.  So what is about the Girl with Dragon Tattoo that makes it special?  Or is it just that I’m a virgin in this world?

I think its to do with fetish.  And I don’t mean the leather/chains/whips kind (although that is given a rather unsavoury role in GWADT).  For a Communist, Laarsen loves his Apple gadgets; he goes into loving detail re the various bits of kit that Lisbeth and Blomqvist own and what apparatus they acquire to boost their elicit investigations, its kind of like the literary equivalent of  Melville’s ‘cinema of process’.  A really fine bit of product placement and it made me covet a mac more than any over-hyped ad campaign.

To extend the fetish theme, what appealed to me was the ‘Swedenization’ of the novel.  That sounds patronising – the novel is set in Sweden, so its bound to be swedish in terms of its location and climate etc, but Laarsen really indulges this.  There is a pure efficiency to his description of character’s appearance and how they go about their business that’s really appealing to a Londoner who hates getting up and getting in the shower, who always has pots in the sink and occasionally takes items out of the laundry bin and decides to ‘chance them on a re-run’.  The cool muted island where most of the action takes place is pathetic fallacy and extremely calming for any urban reader to escape to.  The Swedes also drink tons of coffee (second highest consumers in the world, a fact that was confirmed to me by Jamie does…Stockholm) and I view this as a high sign of how civillised a nation is.

And to return to Laarsen’s political leanings – the book is quite progressive in setting out a feminist agenda and is both intriguing and intrigued by corruption and fraud amongst Sweden’s movers and shakers. I’m not going to talk about it too much here because Christopher Hitchens has already done it. Have a look;

Perhaps I’ve concentrated too much on the first novel, but my comments hold true of the entire trilogy; the foci may change but Laarsen’s approach doesn’t waver.  Be it an investigation into sex trafficking or the iniquities of the Swedish Secret Police, the process of enquiry is fascinating, tied in to the compelling personal drama of a very different heroine.

I finished the trilogy over a month ago and I still feel more than a little bereft. 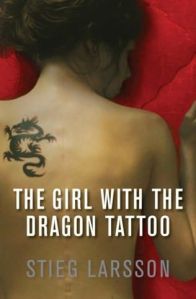